Time to Comply with EMR Systems Standards and Guidelines in Kenya

It has been argued that the existence of two Ministries of Health in Kenya has not been worked well for the country. However, it should be reassuring to note that the document is a product of collaborative efforts between the Ministry of Medical Services and the Ministry of Public Health and Sanitation. National AIDS and STI Control Program (NASCOP) which is placed in the Public Health and Sanitation Ministry was a key contributor to the document’s development. The Division of Health Information Systems (HIS) has been the leader of the effort as it pursues its vision to “Be a centre of excellence for quality health and health-related data and information for use by all.” For more on the division’s strategic plan see an older article I wrote in 2009. The Division of HIS is placed in the Ministry of Medical Services.

It is noteworthy that the EMR implementation initiatives have been driven largely by a need to run the country’s Anti-Retroviral Treatment (ART) programs more efficiently. Development of EMR systems has however grown beyond merely addressing ART programs.
The Division of HIS also envisions a country health care system with “EMR systems that support the provision of holistic health care while improving on health records management and contributing to improved quality of patient care.” 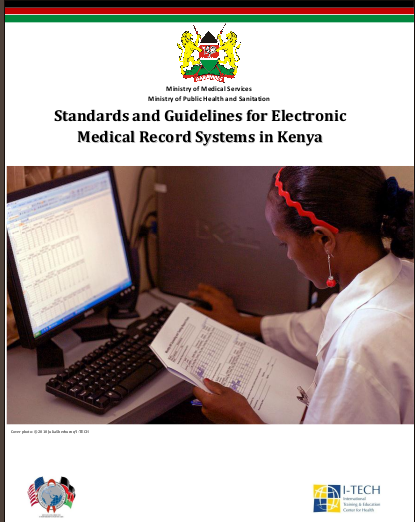 It should be noteworthy therefore that the Division of HIS has taken the lead in championing implementation of EMR systems, not only for clinics with specific disease programs but also for an entire health facilities medical interactions.

In the previous post I highlighted some of the benefits of the standards and guidelines as well as some of the document’s weaker areas. A wide circulation of the document should in itself be a milestone for the government which is often accused of producing documents it fails to distribute widely for implementation and reference. In this post I shall rest at providing readers with a link to the actual document

Hopefully all stakeholders will start referring to it and complying appropriately - this is the line where I get to force relevance to this article’s title.

Popular posts from this blog

June 09, 2015
Social media giant, Facebook estimates that there are 4 to 4.5 million Kenyans who are its monthly active users. Facebook usage patterns in Kenya are arguably strong indicators of the country’s internet connectivity patterns. Over 60% of Kenyans (2.5 - 3 million) accessing facebook at least once a month are based in Nairobi.  This is very telling especially as Kenya's second internet exchange point in Mombasa struggles to make business sense due to having too few users.

February 01, 2010
Tricksters and dishonest people have always existed in our midst.  It is definitely naive to imagine that our new techno-savvy way of life is an exception to the age old social patterns. This afternoon, an M-PESA agent was a victim of a new line of M-PESA fraud.

Here goes the story; this is factual and occurred on February 1st 2010 in a peri-urban setting about 24 kilometres from the Nairobi City Centre
About 2.00PM, a lady and a gentleman who looked to be in their mid twenties visited an M-PESA outlet, claiming to be Safaricom supervisors. The two wore valid looking M-PESA badges and even carried M-PESA promotional material for the outlet.  The two inspected the outlet’s log books then left. Note: It is normal for Safaricom to send supervisors to routinely inspect various parameters on operations of M-PESA outlets. The supervisors usually wear Safaricom badges and often take with them M-PESA promotional material to the outletsAbout 20 minutes after the purported supervisors left, an ol…
30 comments
Read more

March 13, 2015
There is serious agriculture going on in Facebook. At least among Kenyan farmers, there is those that have found Facebook as the place to research and gather knowledge for application in their agricultural related ventures. Others are finding prices of inputs and produce on Facebook groups. Can one be practicing agriculture on Facebook? I think research and access to relevant knowledge for application in one’s agricultural venture is part and parcel of the venture’s activities; hence there can be agricultural practice on Facebook. I think this is one aspect of information technology driven innovation that Agriculture is facing in emerging economies. As I once wrote earlier last year, these innovations may just matter.
Here is my list of the top 10 Facebook Groups covering agricultural interests that involve Kenyans by membership size.